John Douglas Whiteaker was the son of John Whiteaker (1786-1864) by his wife Nancy Smales (1786-1855). He married Nancy Jane Hargrave (1828-1912) in 1848 and had six children by that marriage. He was an American politician, soldier, and judge primarily in the state of Oregon. He joined the U.S. Army during the Mexican-American War and then prospected during the California Gold Rush. After moving to the Oregon Territory he served as a judge and member of the legislature. A Democrat, Whiteaker served as the first state Governor of Oregon from 1859 until 1862 and later was Oregon's Congressman from 1879 to 1881. He also was President of the Oregon State Senate and Speaker of the Oregon House of Representatives.

John Whiteaker was born in Dearborn County, Indiana, United States in the southeast corner of Indiana to farmers on 04 May[1] His parents were John and Nancy (née Smales), and he had four siblings.[1] Growing up he only received six months of formal schooling and as a result, was almost entirely self-educated. Before moving west, he had performed odd jobs, carpentry, and volunteered for military service during the Mexican War, although his unit was never called into battle.

In 1849, he joined the California Gold Rush, earning enough to move his family to Oregon. After arriving in Oregon in 1852, he settled the family on a farm in the southern portion of the Willamette Valley in Lane County, Oregon.[1] There he became active in Democratic Party activities, and was elected to office first as judge of the Probate Court for Lane County in 1856.[1] Whiteaker then was elected as a legislator in the Oregon Territorial Legislaturein 1857 representing Lane County in the House of Representatives.[2]

Oregon was preparing for statehood in 1857, as voters had just approved a Oregon Constitution. John Whiteaker was selected as a Democratic faction's nominee in the first state gubernatorial election, held in June 1858. Whiteaker won by a margin of 1,138, and was inaugurated July 8, 1858.[1] He did not assume office until word that United States Congress had passed Oregon's statehood bill on February 14, 1859.[1] Technically, Oregon had two governors in the interim, as Territorial Governor George Law Curry was legally in charge until the state government-in-waiting was legally empowered to take control.

Once in office, the new governor set out to untangle the large amounts of land claims and counter claims on public lands. He also promoted economic policies favoring home industries, products that Oregonians could make self-sufficiently. Although nicknamed "Honest John", this did not deflect his controversial stands on issues of national importance. John Whiteaker held pro-slavery views which did not sit well with a population mostly in the abolitionist camp.[1] Opponents often used this to attack him as a traitor as the United States descended into the American Civil War.

Prior to 1864, individual states were responsible for picking their own date to celebrate Thanksgiving. In 1859 Governor Whiteaker proclaimed the fourth Thursday of December as the Thanksgiving holiday for Oregon.[3] During his final year as Governor in 1861, Republican U.S. Senator Edward Dickinson Baker was killed in the Battle of Ball's Bluff and John Whiteaker appointed Democratic Party stalwart Benjamin Stark to fill the remainder of Baker's term.[4]

Whiteaker was not nominated again by the Democrats in the 1862 election, and thus left office. He stayed in local politics, winning three terms as a state representative (1866–1870), and election to the State Senate in 1876.[1] During the 1868 session he served as Speaker of the Oregon House of Representatives.[5] He also was President of the Oregon Senate during the 1876[6] and 1878 sessions.[7]

Election to Congress and "Whiteaker's Ride" 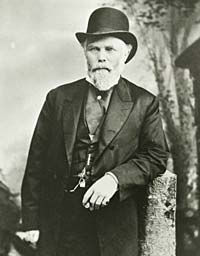 Whiteaker was elected to U.S. House of Representatives in 1878, as Oregon's Representative-at large. The Democrats had been weakened in the House, and needed one vote to prevail in their nominee for Speaker of the United States House of Representatives. The vote was needed by March 18, 1879. John Whiteaker, already on his way to Washington, received word of this urgency while on a steamer between Portland, Oregon and San Francisco. Upon docking in San Francisco on March 12, he was met by a railroad agent, and rushed to a special Central Pacific Railroad express train at Oakland, California. The regular transcontinental train was 25 hours out of Oakland, but Whiteaker's train managed to catch up with it. He arrived in Washington on the morning of March 18, in enough time to be promptly seated by Congress and cast his vote.

The trip cost $1500 at the time, an expense widely criticized by the Democrat's political opposition and the media. Many referred to it as "Whiteaker's ride". In 1880, John Whiteaker ran for re-election to Congress, but was defeated by Republican Melvin Clark George by 1,379 votes.[8] Following his defeat, he retired to his farm near Eugene, Oregon, United States.

John Whiteaker would be called back into politics one more time, in 1885 when President Grover Cleveland appointed him as Oregon's Collector of Revenues at the U.S. Customs House in Portland. He moved back to Eugene after 1890, purchasing 10 city blocks in the central city. The plat, Whiteaker's Addition, is commonly known as the Whiteaker neighborhood.

He stayed in Eugene, Oregon, United States until his death on 02 October 1902 and he is buried at the Masonic Cemetery. Whiteaker Elementary School in Eugene is named in his honor.